Dr. Cross Helps in the Fight Against Ovarian Cancer 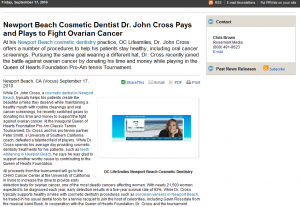 Newport beach cosmetic dentist Dr. John Cross recently joined the Queen of Heart Foundation at their Pro-Am Classic Tennis Tournament to support the fight against ovarian cancer. Dr. Cross and his tennis partner, Pete Smith, a coach at the University of Southern California, donated their time and money to the worthy cause, then went on to defeat a highly-skilled field of players to win the tournament at the Newport Beach Tennis Club.

The participating players included a number of well-known celebrities, including Gavin Rossdale from the musical band Bush, who in cooperation with the Queen of Hearts Foundation remain committed to raising money and awareness for early detection of ovarian cancer. Over the last seven years, the Queen of Hearts Foundation, with the help of celebrities and health care professionals alike, has donated over $1 million.

While Dr. Cross typically helps his patients create beautiful smiles while maintaining a healthy mouth with scheduled cleanings and oral cancer screenings in Newport Beach, he says he was happy to trade in his usual dental tools for a tennis racquet to support his surrounding community and the fight against ovarian cancer.